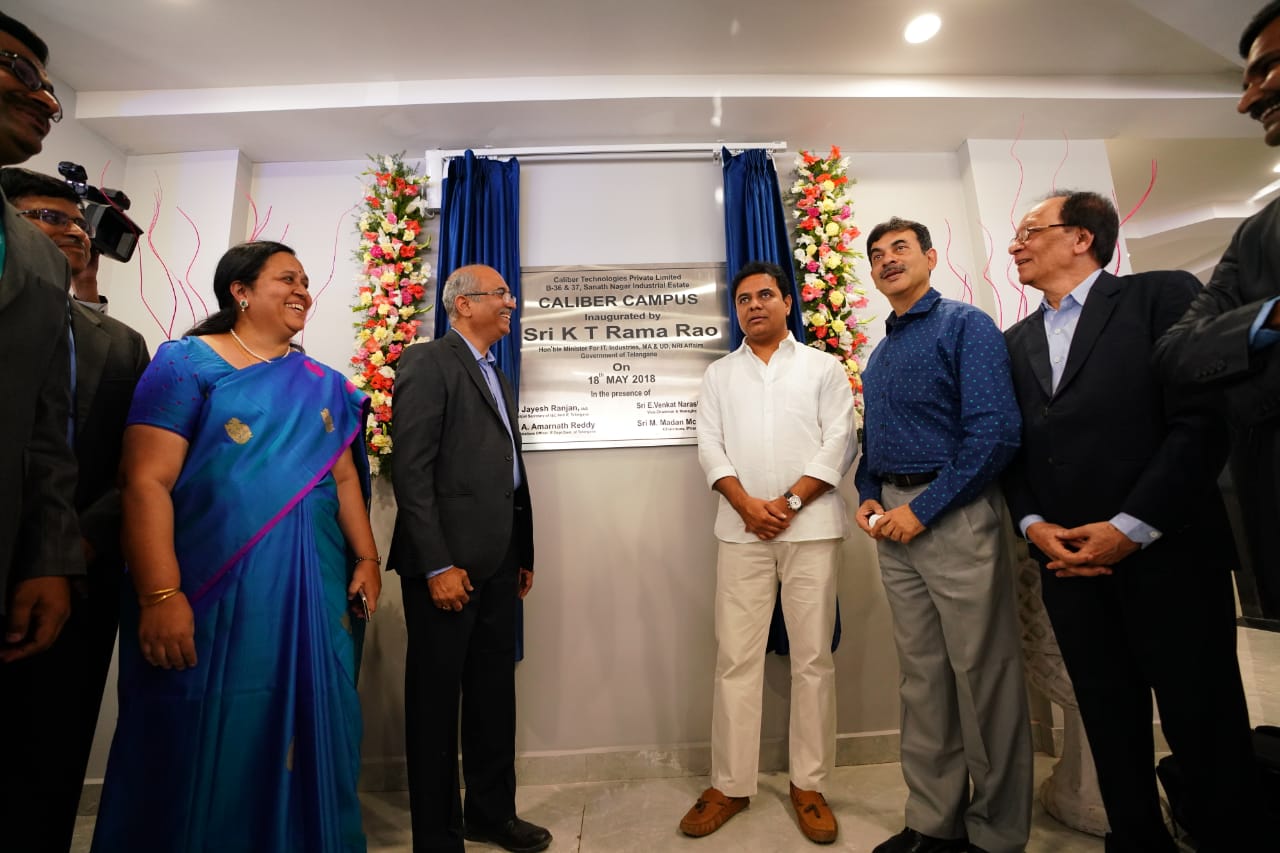 The long-awaited moment had finally come on May 18th, 2018, when Caliber’s new building B-37 was inaugurated by Mr. K. T. Rama Rao, hon’ble minister for IT industries, MA & UD, NRI Affairs, Government of Telangana at 4.00 p.m. The event was marked by the presence of other eminent guests such as Jayesh Ranjan (IAS), principal secretary of I&C and IT, Telangana, A. Amarnath Reddy, chief relations officer, IT Dept. Govt of Telangana, E. Venkat Narasimha Reddy, vice chairman & managing director, TSIIC, and M. Madan Mohan Reddy, chairman, Pharmexcil.

Due to expansion of the business, Caliber was finding it difficult to accommodate its growing number of employees in one building. They had to rent premises for meeting the demand. The idea of building an IT firm campus sprang out of this need. The construction of the new building in the adjacent land commenced in Jan 2017 and took one year four months to complete the work. The state-of-the-art Caliber campus was designed by the reputed Bhavana Architectural company. The total Caliber campus consisted of the built-up area of 39,000 Sq. ft comprising of two four-storied buildings that can easily accommodate around 600 employees, an open-air theater (OAT), an underground parking lot, a hygienic canteen, a child-care center for the employees’ infants and other amenities.

On the event day, a short film on the journey of the company was played along with the customers’ greetings and feedback videos on different products. The day also witnessed the launch of Caliber’s Corporate Social Responsibility (CSR) Foundation known as Caliber Foundation. Cultural events in the form of classical music were also arranged for the entertainment purpose. Mr. K.T. Rama Rao was mighty impressed with the management for choosing Sanath Nagar, a non-IT area for establishing such a huge IT company campus. As per him, the Telangana Government was keen in promoting the Look East Policy (LEAP), and Caliber’s choice of area in setting up an IT firm helped in including the central region also in its promotion campaigns. Telangana Government also presented Caliber with “Establishment in central business district (Sanath Nagar) award recognizing its initiative and zest. It was indeed a proud and memorable day for all the Caliberians.